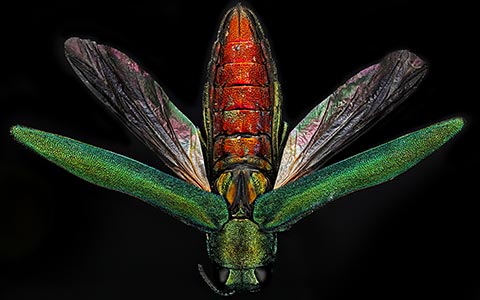 Prevent your ash tree from becoming an ecological hazard and infested by the emerald ash borer. By knowing how to confirm an infestation and who to call, you can protect surrounding trees and help in the effort to contain this tree-killing insect.

72tree.com gathered information on and how to identify an emerald ash borer infestation, how to protect surrounding trees, and when to remove your ash tree.

The Emerald Ash borer (Agrilus planipennis) is native to eastern Asia. It is a species of beetle that completes its life cycle by going through four distinct stages:

Eggs – This borer’s eggs are laid in clusters on ash tree bark and are very small at 1/25 of an inch, and reddish-brown.

Larvae – Growing to about an inch long, larvae are white, flat, and have a segmented body. This borer’s larvae feed on the cambium and phloem of its host under the bark, leaving S-shaped tunnels or galleries as they feed. Emerald ash borers in the larval stage are responsible for the damage that leads to the eventual hydraulic failure and death of the host tree.

Pupae – In this form, the beetle is transitioning to adulthood and does not feed.

Adult – Adults are about 3/8 to 5/8 of an inch long with metallic, bright green outer wing coverings. The adult emerald ash borer has a coppery red or purplish colored abdomen that is exposed when its wing coverings are lifted. Adults will fly up to a half-mile or more to find new ash trees to nest in. Adult emerald ash borers feed on the tree’s foliage causing little or no damage to the tree.

The emerald ash borer was first discovered in the U.S., infesting dead ash trees in Detroit, Michigan, and Windsor, Ontario in 2002. This beetle is responsible for killing millions of ash trees throughout the areas where it is found.

New emerald ash borer infestations can be challenging to detect (they usually begin high up in the crown of the tree). By the time you detect signs and symptoms, the tree is already heavily infested, declining in health, and dying. However, if you can identify heavily infested trees, there may be enough time to protect and save lightly infested trees in the area or at least contain the spread. Consider the following signs of the beetle and symptoms of an infestation: 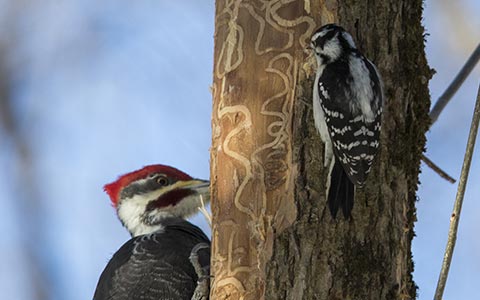 Exit Holes – D-shaped exit holes up to 1/8 inch wide. The size and shape of the exit holes are significant.  Exit holes wider than 1/8 inch, or round holes rather than flattened on one side (D-shaped), are not emerald ash borer.

Leaf Notches – Adults will feed on ash leaves from the outer edge in, leaving notches in the leaves.

Woodpecker Activity – Woodpeckers will leave holes in the bark, surrounded by light-colored patches, as they probe beneath the bark to feed on the larvae.

Squirrel Activity – Some squirrel species will dig into the bark as they try to feed on the larvae. They leave ragged strips of bark on the trunk or stems, exposing the S-shaped galleries formed by the larvae.

Epicormic Shoots (suckers or water sprouts) – When an ash tree has been successfully attacked and is under stress, it can produce epicormic shoots on the trunk, roots, and sometimes in the crown on stems and larger branches.

Stress Crops – Trees under severe stress can produce massive seed crops. Unfortunately, under these circumstances, few of the seeds will be viable. 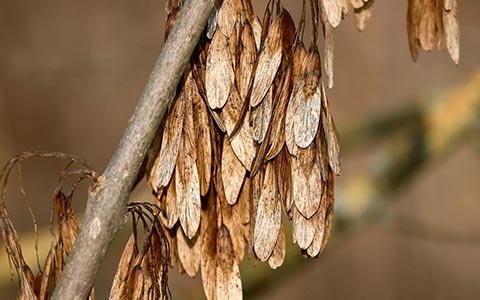 Chlorosis – As the infestation progresses, the foliage will turn yellow, wilt, and fall off the tree.

Branch Death – As the tree begins to suffer hydraulic failure, branches will die, lose their leaves, and become brittle.

Crown Thinning – Perhaps the most telling of the symptoms is the way the crown thins from the top down, leaving dead and bare branches exposed as the condition descends the tree.

You can also determine if you may be at high risk of infestation by visiting emeraldashborer.info/documents/MultiState_EABpos.pdf to see if your region or state is under Federal quarantine for the movement of emerald ash borer regulated articles.

Native North American ash trees possess almost no natural resistance to the emerald ash borer. Death of infested trees is at or near 100% unless managed very early on for emerald ash borer control. Once you have confirmed an infestation, immediate action should be taken to protect trees in surrounding areas.

• Call the USDA Emerald Ash Borer Hotline at (866) 322-4512 for specialized instruction and guidance (specific to your location)
• Hire an arborist to inspect and treat neighboring trees
• If your tree is beyond saving, remove it immediately
• Prevent spreading an emerald ash borer infestation by having your felled tree chipped (this process is highly effective in eliminating the borer) 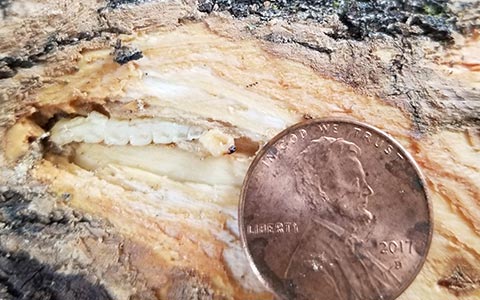 Because this killer beetle does not discriminate between sick or healthy ash trees, there is little you can do besides chemical deterrence to prevent an infestation. Preventative measures for this pest should be applied by an ISA certified arborist.

In this article, you discovered information about the emerald ash borer, signs and symptoms that identify it, and what to do if you confirm an infestation in your ash tree.

By taking immediate action to deal with a potential or confirmed emerald ash borer infestation, you are protecting the ash tree population in your area. Besides saving yourself from likely financial losses when you are forced to take action.

Ignoring the dangers of an emerald ash borer infestation can lead to the destruction of an entire region’s ash tree population, ecosystem, and cause catastrophic damages as dead trees begin to fall.

This article was first published on: http://www.72tree.com/emerald-ash-borer-tree-damage/